We’ve owned our house for over a year and it still doesn’t quite feel like home to me. We haven’t been in it for a year yet. That’s in July. But, there’s been many times that I’ve wondered where I put something and my references for where to look have been empty. I only know where I would have looked for it in our old house. New house, did it even move with us or did we let it go? Give it time. We were in our old house for twenty-six years. There’s no quick way to remap your brain.

My mother is back with my sister in her house. They are putting up ramps and remodeling for wheelchair access. She’ll never walk again. I found out that when they attempted to do the Girdlestone to fix her hip in place, there wasn’t enough osteo-solidity to get the screws and bolts to hold her together. So, she just doesn’t have a hip on that side anymore. I’m still not quite sure how that works. But she says that her hardest day-to-day struggle now is carrying things around in her wheelchair. Apparently she doesn’t have much of a lap on that side either. So things just slide to the floor.

I now all this because she called me up the other day and asked me about a computer issue. I wasn’t very helpful. I kept asking her to press the windows key. Or do a ctrl-F4. Or ctrl-shift-esc. I knew that they had had to have someone look at her laptop to get it back in a usable condition. I couldn’t get anyone to tell me what was wrong with it in the first place or what they had to fix. But when my mother went to 23andme.com and got a warning that she needed to call an 800 number, she at least knew that it was fake. I was finally able to help her. But, it would have helped me to know that I was dealing with a chromebook.

Alma is no longer at home. Her doctor and ‘helpers’ say that she is more frail than she lets on. And that she needs more care than she is getting. Last year, she was getting twenty hours of in-home care a week. Someone to help with the housecleaning and laundry. Three months ago, it was upped to forty hours a week. She had had a few bouts of forgetfulness and some trips to the minor care clinic for a sprained ankle or because she felt dizzy, Last month, because of her hip, she needed two weeks of 24/7 care. Bottom line; if there were a chance that she could get back to where she was physically even just a year ago, she could be alright living alone. The reality is that she’s on a physical and mental decline. She forgets her medications. She can’t even walk around the block, maybe not even find her way around the block. On a good day, she could help do the dishes and fix herself a sandwich. It was time to make a change.

So Thea took a week off work. And Alma is now at Southridge Place. To her credit, Alma didn’t put up any fuss about it. She’s in a three hundred square foot room. Honestly, it’s a bit smaller than a Days Inn single. I’m pretty sure that the rooms that we stayed in when we skied were bigger. But at Southridge Place she will be feed and they will check on her and watch her medicines. There’s cable on the TV. That’s all I know that she’s ever wanted. There was a Senior’s Transition team that helped move her in. While Thea took Alma out for her birthday lunch, the team came in and moved her bed, dresser, recliner and chair, pictures and knick-knacks. Then instead of going to her old home, they just ended up at her new one.

My only contributions were after the fact. Somehow in all the moving, they managed to lose track of which Cox remote was already in the room and which ones they had inadvertently brought with the TV. Little known fact, the Cox Mini box and its remote are factory mated to each other, not programmed to each other. All three remotes looked the same but only one of them would work with the mini-box in that room. I got to figure that out. That and even though they had hdmi cables, they hooked the tv up with coax. I corrected that as well.

This site uses Akismet to reduce spam. Learn how your comment data is processed.

Photo of the Moment 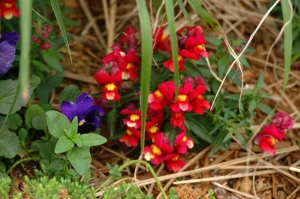